This Is the Place I was Telling You About

A Pho Trio in Phoenix

"I am a Vietnamese-food lover, and these are the places I go to on a regular basis. They're authentic."
– Nobuo Fukuda, chef/owner at Nobuo at Teeter House (Phoenix)

Lee Lee International Supermarkets is an Arizona-based store specializing in foods from more than 30 countries and regions. Its Peoria location is also home to Pho Tan Thanh, a Vietnamese restaurant known for their pho (packed with rice noodles, onions, bean sprouts and more), as well as must-try dishes like tamarind soup and chicken spring rolls.

Pho 43 (so named for the location at 43rd Avenue and Thomas Road in Phoenix) serves up traditional Vietnamese food in a no-frills space. Die-hard fans swear by the flavorful and savory pho broth while always making sure to save room for the homemade macaroons.

Despite its name, this Glendale eatery offers more than just Vietnamese pho; the menu ranges from Thai cuisine to Japanese sushi and sashimi. Go for the crab cake with capers and coconut milk, teriyaki chicken and pork, or, of course, the pho. 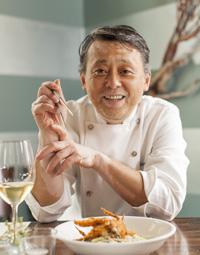 This Tokyo-born chef is one of Arizona's most treasured culinary geniuses. He won a James Beard Award in 2007 for his work at Sea Saw, the Scottsdale restaurant he owned before opening Nobuo at Teeter House, in downtown Phoenix.

In addition to earning the coveted James Beard Award, Fukuda also holds numerous "best of" accolades – from regional and national outlets – for his inventive Japanese cuisine.

Stop by Teeter House during the day and you'll find an elegant lunch spot. Swing by at night for a foodie adventure into the world of omakase, or chef's choice. Don't worry – you're in skilled hands with Fukuda.

Arizona visitors often hear "eat like a local." Enjoy being a tourist while eating local at these 5 not-to-miss Arizona restaurants in Mesa.

It's the Weekend. Let's Eat. Tempe

As the home of Arizona State University, Tempe doesn't disappoint those in search of college-town grub. But foodies will also be pleased to find a robust offering of elevated cuisine and more.